Scarves being scarves, it’s much harder to take a full picture. Happy holidays, whichever you celebrate! I have successfully prepared the three scarves needed for Christmas gifts by Christmas day!… This was a kind of meaningless goal, because I won’t actually SEE the recipients today (likely not until later in January,) but they are nonetheless done! This pattern was The Big Book of Granny Squares’ motif 9, Dragonfly Lace. Then when I realized it would need pretty significant blocking because lace, I decided to only do the edges in that. End result looks pretty good!

As mentioned, this was my first attempt blocking. And because I didn’t realize the challenges all of this presented, it’s with silk. For that, the end results are pretty good! I used the remains of the Sublime Bamboo and Silk from my previous scarf (which means the scarf’s a touch on the short side, since some of that skein was used for bobbles,) and did one lace edge that I tied off to attach at the end and one I changed to the main color after finishing so they could both face the same direction. The main yarn is also Sublime, but their baby cashmere/Merino/silk yarn. I still have one more scarf to go, but it isn’t supposed to be started before I see the recipient later this evening. (I’m not saying I’m getting yarn for it, but… probably.) In the meantime, I can get back to a bit of amigurumi work. And there’s a certain Dearly Beloved character I want to try and have done by the end of January. 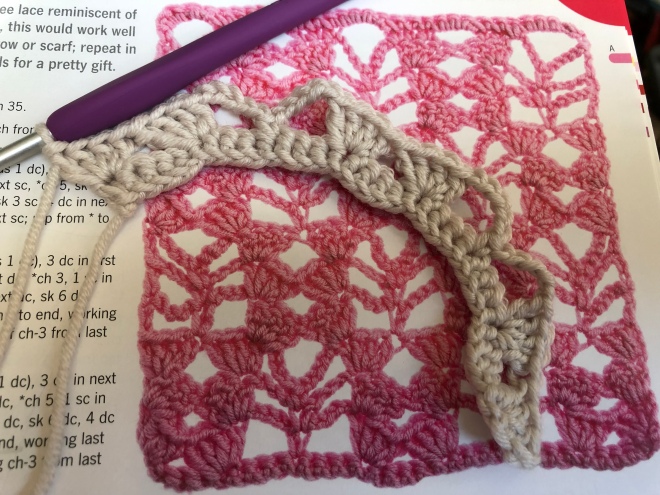 I’m gonna have to learn blocking for this one too, aren’t I.