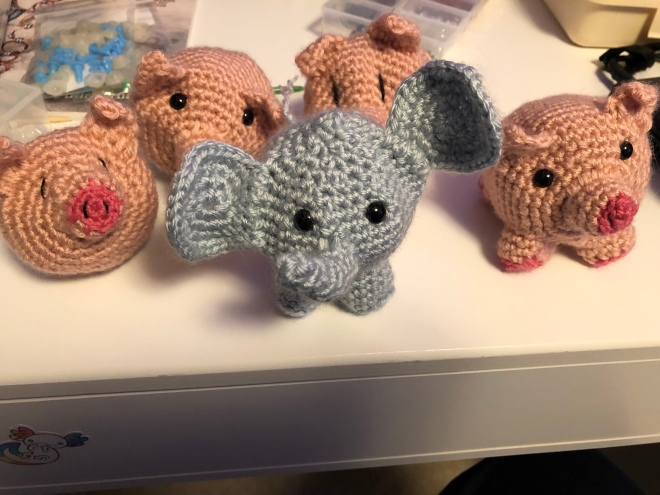 I’ve got a table at a local craft show next month! Which means building up stock. In this case, that stock is mostly currently pigs. END_OF_DOCUMENT_TOKEN_TO_BE_REPLACED

Well this one took a while. Remember how I said my favorite character in Kingdom Hearts is Xion? Well, the ending of KHIII gave me everything I wanted including a new getup for her. Which I am, it turns out, mostly capable of making! I tweaked the original doll’s proportions so she’s a bit bigger now. Gives more space for detailwork, which is good with something as detailed and hard to see as her blouse, which… well, look at a closeup. I ultimately couldn’t figure out the buttons (French or Colonial knots could do it but they still don’t show up well and I can’t quite make them yet,) but she has the pleats on her skirt, the collar, the belt, and the ruffles on her sleeves. A bit clumsy at times, but did I ever try.

I’m still super proud of the boots and skirt, which is pleated using the technique Here, and the first technique here, which is the same technique but different pictures. Both were helpful. The boots started from the base from that Tonberry pattern I did from ArtisticGaming a while back, and then modified to fit a human (if Kingdom Heartsy) foot.

The hair fit largely the same, but different size means slightly different look, and her new blue eyes are from GlassEyesOnline. I am really proud of the full result, even if, say, the wire didn’t quite go through completely straight for the arms. She’s done! And eventually, her friends will join her. But later. I have some other projects to work on.